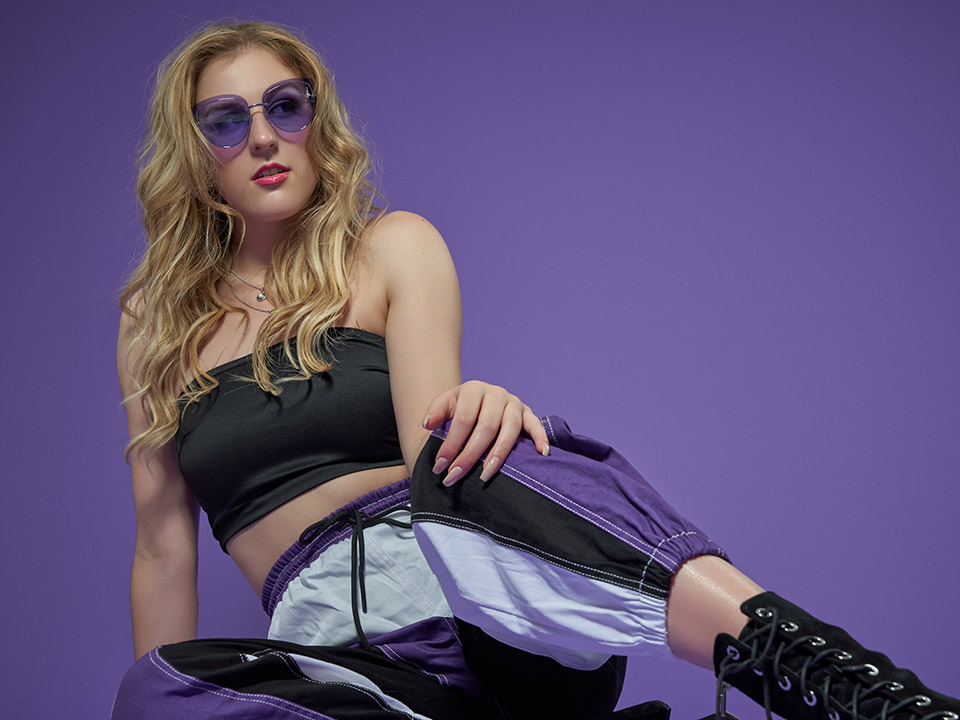 At just 19, this incredibly talented artist/composer/dancer/actress powerhouse, has exploded onto the music scene. Set to be the next
household name – not only here in the US but in her home country of Australia and the UK where her music is creating a storm of interest.

In late 2016, Emily released her debut single, SUGARCOATED, a collaboration with talented Australian producer Alius. Sugarcoated, with a blaze of bold, vibrant sounds and exotic pop/electro blends reflected the confidence of an artist truly on the rise. Supported with a remix package by DJ Marcus Knight (Armand Van Helden, Timbaland, Missy Elliot, Lenny Fontana, Space Cowboys, +) and Sunset Child (top 5 ARIA club chart), the song was played in clubs worldwide and received airplay in the US reaching #40 on the Mediabase Activator Chart.

Based on the success of her debut tour, Emily was invited to join the High School Nation Fall Festival Tour in late-2018, performing two dozen shows to more than 40,000 teenagers across North America.

She also rounded out her very successful 2018 with the release of JINGLE JINGLE, her first Christmas single, selected as the featured song in one of Hallmark’s famous Christmas movies.

Hi Emily, please tell us a little about yourself?

Hey guys! Thank you for taking the time to chat with me today. I’m a pop artist from Australia, currently based in Los Angeles.

Can you describe yourself in 3 words?

How did you get started in the music business?

I always knew that music would be in some way a part of my life. It’s always been my passion. I started as a dancer, which to me is really music and lyrics through movement. I released my first single in 2016 and having been hustling and working since then.

Who has influenced you musically, and why did you choose to make music?

I’m constantly influenced by the people close to me in my life as well as many other artists! All the writers and producers I’ve had the honor of working with have definitely helped shape me into the artist I am today. I’ve been a dancer since I was 3 years old and I think it is one of the main things that inspired me to make music. The great thing is that I get to integrate my dance into my performances. On top of being a singer there’s also the writing process, the video making process all of which I love being a part of.

Do you ever get nervous before you perform live?

Yes! That feeling of having butterflies never really goes away. However feeling nervous is usually a sign that what you are doing is important to you. It means that you care. It’s about taking those nerves and using them to drive you.

I think my music has definitely grown with me. I’ve explored a lot of different music and worked with a lot of different people, all of who have influenced my music in a unique way. I like to take on every opportunity and give it everything I’ve got, so that I have a strong foundation when building up to the next thing. If I half ass something along the way, I’ve put a dent in the foundation and when you finally get to the top, the building will just fall down. However if you put 100% into every step along the way, no matter how big or small, the foundation will be strong and the building will stand tall, not only creating strength but also longevity.

Next I want to continue performing and also touring either solo or with other artists. I want to keep growing my music and putting out new and creative visuals. Visuals and music videos are one of my favorite parts. I’m so keen to release some of the music I’ve got tucked away.

What is it like to become a Top 10 Billboard charting Dance/Pop artist?

Hitting #9 on the Billboard Dance Charts was a big moment. I was so grateful and so humbled by the news. I’d been working my way up that chart for weeks and to hit top 10 was an incredible feeling. I was so thankful to everyone on my team who helped me get to that point.

Now tell us about your hits “Boom,” “Walk in Silence” and “Summer On Lock?” What was it like to make them and have them be received with such tremendous success?

I wrote “BOOM” with legendary producers the Jackie Boyz, Cindy Valentine and The Furthur. The second I heard the track I was so pumped. It had a juicy vibe that I loved and that I couldn’t wait to start writing to.

“Walk in Silence”was my 3rd single release. I wrote this song with one of a kind producers, Joe Cruz and Cindy Valentine. Walk in Silence has a mid tempo, contemporary pop vibe. Lyrically this song means a lot to me.

“Summer On Lock” came about as a collaboration with award winning Grammy writers/producers Damon Elliot, Mix, Niko the Kid and Cindy Valentine. Now this one was so fun! “Summer On Lock” is definitely a track that you can dance out to. Along with that there are also 7 killer remixes for the song!

“So Bad” is one of my latest singles and I just instantly fell in love with the track when I first heard it. It really fit my musical style and I was just so excited to lay it down and perform it! I’m so thankful for the reception “So Bad” has been getting! I just performed it as part of my set on a five week high school tour down the East Coast of North America which was incredible! The great thing about all of these sessions is that they were all collaborative which is such a fun way to work on a project.

Remixes are such a fun part of the process! The DJs who have remixed my songs are all musical geniuses and I was so honored to have them add their individual touch to my songs.

I love that a remix basically moves your music into a whole other genre which in turn opens you up to a whole other audience. And obviously as a dancer I love a good remix! There is actually a Hector Fonseca remix to “So Bad” coming out very soon!

Where can we can see you performing next?

My first performance for 2019 will be at the Cathedral Pride Festival in Palm Springs on March 30th. Can’t wait to be back on stage again!

To me, happiness is about being comfortable in your own skin and being completely in love with yourself as a person. It’s about trusting your own mind, knowing what you’re passionate about and believing in yourself enough to follow those passions.

New music is coming and it’s definitely my most exciting stuff to date! More visuals and remixes will also be dropping very soon!

My fashion sense is honestly all over the map. Ultimately when I’m on stage I have to be comfortable! There’s a lot of energy and movement in my set so comfort is key. And on a day to day basis I like to play around and try out a bunch of different looks.

Last year I started working with The Art of Elysium. The Art of Elysium work with volunteer artists to craft creative, tailor-made programs for people in need. They currently offer 110 community programs a month, serving over 30,000 individuals a year. I got involved with the Art of Elysium because I get so much joy from music and dance that I wanted to share that joy with others. I have the highest respect for everything this organization has to offer. I am loving it so far and cannot wait to continue working with them.

You can keep up with everything I’m doing on all social media platforms @TheEmilyPerry or on my website at TheEmilyPerry.com

Favorite Quote: “You can imitate a light like mine but you cannot become it.”

Book: The Sun and Her Flowers by Rupi Kuar