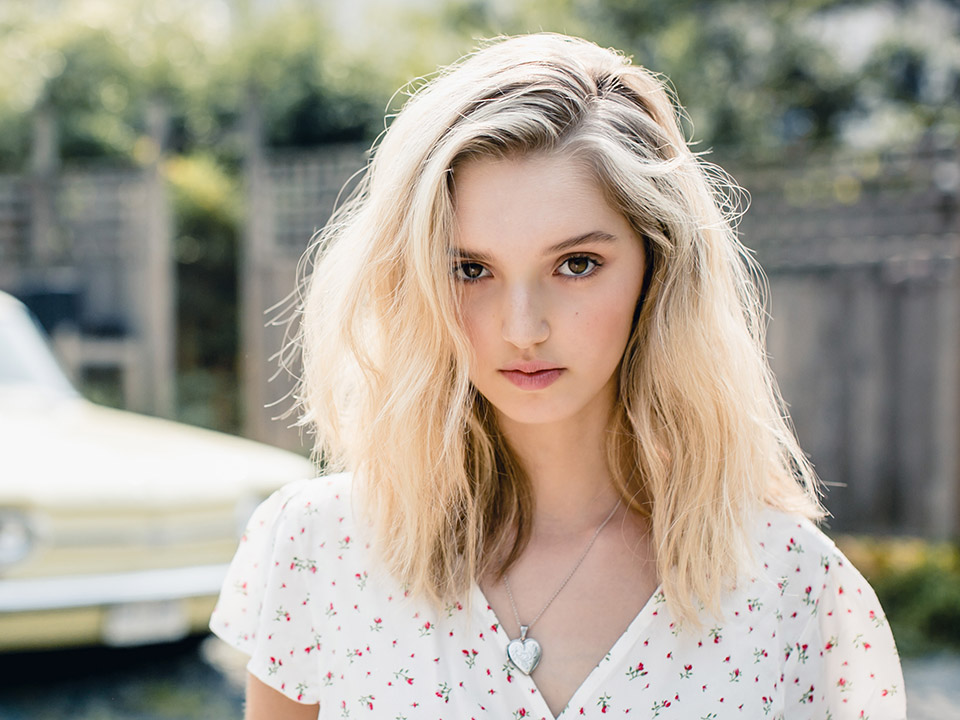 Our interview with beautiful young actress Kaitlyn Bernard, who can be seen alongside Thomas Jane and Molly Parker, as Shannon Cotterie in the year’s most impressive Stephen King adaptation, Netflix’s original film 1922, premiering October 20th.

Based on King’s 131-page storytelling of a man’s confession of his wife’s murder, 1922 follows Wilfred James (Thomas Jane), who admits to killing his wife, Arlette (Molly Parker), with his son Henry (Dylan Schmid) in Nebraska in 1922. But after he buries her body, he finds himself terrorized by rats, and as his life begins to unravel, becomes convinced his wife is haunting him. Kaitlyn is mesmerizing as Shannon, Henry’s 14-year-old pregnant girlfriend. Dubbed “The Sweetheart Bandits” the two go on the run in an attempt to escape their tragic pasts.

My parents are absolutely my biggest supporters. This industry is really tough at times and they have helped me to push through the more challenging times, and are always there to support me. To be successful as a actress you have to have parents who are willing to let their lives revolve around acting.

My love for acting began in musical theater when I was about three. I loved performing live, and actually still really enjoy live theater. After auditioning for a few film roles however, I became more drawn to that style of acting. I started doing a lot of training specific to film and television, and luckily my career started to develop organically from there. I booked a number of student films, then smaller roles on TV, followed by lead roles in feature films.

My first role was a lead in a student film called Soon Enough. It was a really fun project. Outside of student films, my first bigger role was a supporting lead in the Hallmark movie Mom’s Day Away.

I love acting and over the years have really learned to manage the ups and downs that go with this industry. I’m fully committed to acting as a career choice long term, so I know that handling the good with the more challenging parts of being an actress is important. The best part of being an actress is completing an audition or callback where I’ve felt fully committed. I choose to focus on doing everything I can to become the character I’m auditioning for. I love getting a new script and diving into it. I think the hardest part of this industry, especially for young actors/actresses, is the disappointment. The highs and lows are extreme and you have to develop really thick skin.

I think the best advice that I’ve been given, while sometimes hard to follow, is from my agent Murray Gibson. He’s an amazing support to me and understands this industry so well. He encourages me to do all I can for every role and then the minute I’m done my audition to just let it go. It’s hard sometimes because as an actress you become emotionally attached to the role you are auditioning for. I’ve learned though that so many variables go into the end decision, so adopting the belief that if it’s meant it will be, makes it easier.

Tell us about the Netflix’s original film “1922”? And your role as Shannon Cotterie?

1922 was an amazing project, and I feel very fortunate to have been part of it. It’s based on the Stephen King novella Full Dark, No Stars, and follows Wilfred James as he confesses to his wife’s murder. After he buries her body, his life begins to unravel, and becomes convinced his wife is haunting him. I play the love interest of Wilfred’s son Henry, who is also involved in the murder. We end up on the run, get into trouble and are known in the film as The Sweetheart Bandits.

What was your most memorable experience from the set?

There were so many cool experiences from 1922. The costumes and shoot locations alone were incredible, and it was also amazing to work with Thomas Jane, who during the entire shoot never broke character on or off set. I also felt very fortunate to be able to work with director Zak Hilditch. Lastly, the most memorable part for me about 1922, was Henry and Shannon’s dynamic with each other. Dylan and I had a lot fun portraying two characters with a very similar story line to the infamous Bonnie and Clyde.

Aside from 1922, I worked on a really interesting indie film called Cadence. It was a psychological thriller with a huge plot twist involving my character. The film did really well at festivals and went on to be nominated for 10 Leo Awards. I’ve also done a number of guest star roles on TV shows including CBC’s Mr. D, and When Calls the Heart, and recently I had a role in an upcoming feature called Richard Says Goodbye with Johnny Depp. A definite highlight in my career was having a chance to work with him.

Of all my projects to date however, I would have to say one of my favorite projects was The Healer, a feature film I starred in alongside Jonathon Price, Oliver Jackson-Cohen and Camilla Luddington. I played a 14 year girl named Abigail who was living with incurable cancer. The movie became so much more than just a film for me. After wrapping the film, I was inspired to start my own foundation supporting kids living with serious illness. To date, my own foundation, entitled Just Breathe, has raised close to $120,000 to support the Canadian Cancer Society’s Camp Goodtimes. My decision to start Just Breathe was very much in line with what the film stands for as a whole. The Healer has been released in eight countries with all proceeds going towards children living with serious illness. We expect a North American release sometime in 2018.

Natalie Portman is one of my favorite actresses, I love how her career evolved since The Professional. I’ve learned a lot by watching her when I was younger and even in her recent roles such as Jackie. Her work is outstanding.

1. Almond milk matcha lattes is my absolute favorite drink to make at home and take with me wherever I go.
2. My old fashion planner. Even though some people like having everything on their phone when it comes to their schedules, I love having everything written down on paper because I am such a visual person.
3. I always take whatever script I am learning at the time with me, so that whenever I have a moment I can work on it.