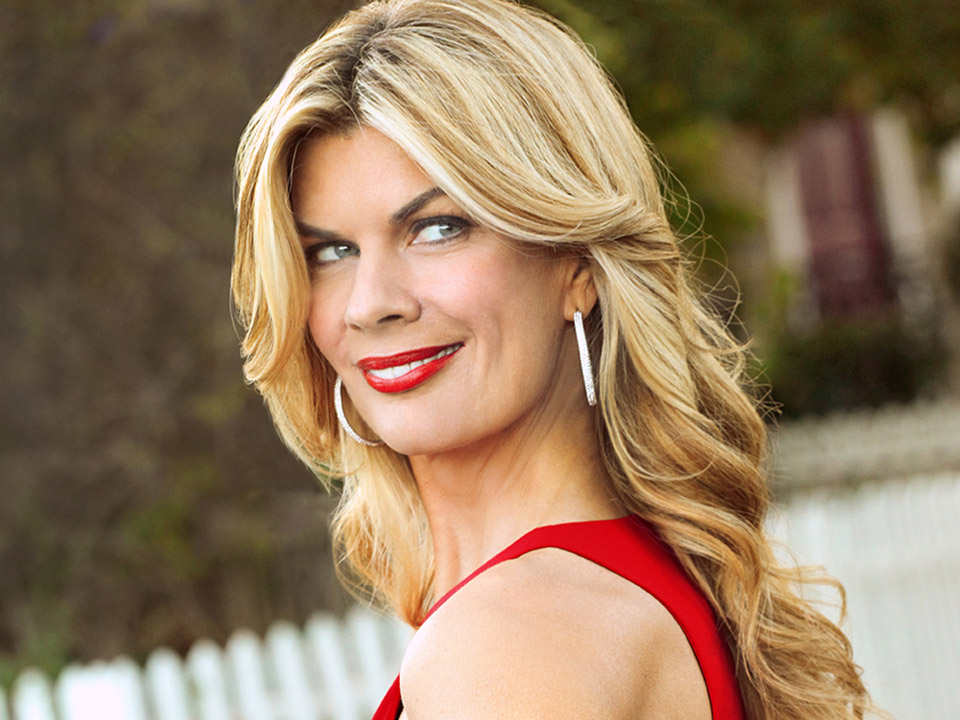 Matthews has built an impressive acting resume. Her additional film and television credits include Spin City, Another Assembly, Daddy, and starring role on Fox’s 13 Bourbon Street. Her love for the theater has shown through her numerous leading roles in some of South Florida’s finest professional theaters including The Plaza Theatre’s production of Neil Simon’s Chapter Two. Matthews also has a one woman show, The Bombshell Show, where she celebrates Hollywood’s iconic singing stars of the Golden Age.

Matthews has a very dedicated and loyal social media following. When she is not busy acting, Matthews loves spending time with two daughters Miranda and Bianca. She also donates her time and resources to a number of charities advocating the importance of the arts in education.

Hi Mia please tell us about you?

I’m an actress, wife, and mother. Not in order of importance!

How did you get your start in acting?

I was a competitive gymnast growing up and found that I enjoyed the performing in front of an audience much more than the actual gymnastics. So, I started taking dance lessons and that led me to musical theater which I went on to study at Carnegie Mellon University.

Gladys, the comic lead, in my high school production of The Pajama Game. I was a freshman so it was kind of a big deal to be cast. I was petrified because a few years back, a middle school teacher had told me I couldn’t sing. My drama teacher Mr. Carpenter convinced me to sing. From the reaction I got from the audience I discovered that I could, and  pretty darn well! It was a great lesson in not letting anyone hold you back from pursuing what you love.

What is the series “South Beach” about?

South Beach is a series about two rival music companies in Miami. It is currently streaming on Hulu.

Tell us about your role as Karen?

Karen is publicist of one of the music companies. She works hard, plays hard, and loves her martinis. I had to do lots of character study for that!

What was your favorite episode of the season?

I loved the bar scene I did with Arlene Tua. It was so fun working with her…it didn’t feel like work but like two girls hanging out chatting at a bar. Except, sadly the martinis were just water!

How were you selected for this show?

I had auditioned for the show but was out of town for the callbacks. I was really disappointed because It seemed like a great project. Fortunately they had another set of callbacks and I ended up being cast in a role I hadn’t even auditioned for. I didn’t realize it until they sent me the script!

And about the hit series Every Witch Way?

My daughter’s best friend, Zoey Burger was already on the show so I was familiar with it. I loved the character description of Desdemona and was really excited about the prospect of bringing her to life. I went in very determined to book it. Playing dual personalities witches, good and evil, on a hit kids TV show was a dream job!

Do you prefer performing on Theater’s or acting on series? Why?

I enjoy both for different reasons.  I love the intimacy of film. However, when I’m on television or film, I miss the energy of a live audience. My ideal job would be working on a TV show in front of a live studio audience…that’s the best of both worlds!

Working on Every Witch Way I would have to say the reaction of the fans. They are so devoted and enthusiastic. I get letters and messages about how much the show has positively affected them. It’s really amazing how the show impacts kids. Many feel like they know us and are a part of their lives.

When someone is nasty or treats you poorly, don’t take it personally. It says nothing about you but a lot about them.

A brunch by the beach that lasts through dinner. Then karaoke in the karaoke room in my house. Yes, I have a room for karaoke! I choose my friends by their willingness to embarrass themselves in public.

I have devoted much of my life to philanthropy and fundraising. I spent many years chairing events and serving on committees in Palm Beach. I have also served on several boards including the Education committee of the Kravis Center for the Performing Arts. I am a big proponent of arts education for children.

Quote: “If you never did you should, these things are fun and fun is good!” -Dr. Seuss

Favorite Singer/artist : My daughters introduced me to YouTuber Colleen Ballinger, and her alter ego MirandaSings, years ago and I’m kind of obsessed. Comic genius with amazing pipes!

Movie:  The Princess Bride and Breakfast at Tiffany’s. I like a good fairy tale and, alright, I’m a bit of a romantic!

Sports Team: Whomever is losing.

Book: Act One by Moss Hart. Amazing autobiography for a theater geek like me!