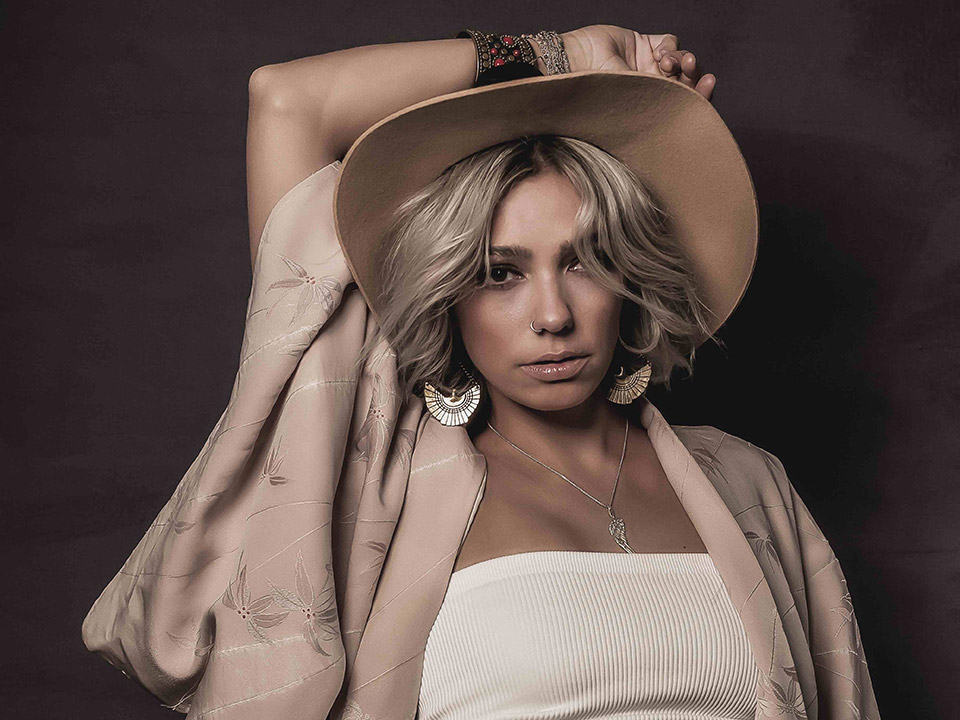 Born and raised in Zürich, Switzerland, Börni found her passion for music at just three years old, when she began singing and playing the violin, soon also turning to the piano and guitar.

In 2007, Börni competed in the national Swiss show, “Musicstar,” where her performance led her to ink a record deal with Sony Music. While with Sony, she was able to create and release two albums, “Fighter” (2008), which was featured in the Swiss music charts’ Top 10 and “Plan B,” while working alongside some of the most successful producers in Switzerland and four-time Grammy nominated musician and producer/songwriter Linda Perry.

Börni released this month her new hit single “New Heights” inspired by the struggles that those with big dreams go through, “New Heights” explores what is possible when you don’t give up and chase after your dreams to fruition. Produced by Synematik, Börni’s unique new sound carries fresh and futuristic notes of pop and dance blended with underlying hip-hop influences, apparent throughout the playful single.

Hi Börni, please tell us a little about you?

Hi, thank you much for having me! Born and raised in Zürich, Switzerland, I found my passion for music at just three years old when I began singing and playing the violin, soon also turning to the piano and guitar. Throughout my adolescence, I sang in gospel choirs, wrote and performed my own songs in my first garage band, and quickly learned how to perform and entertain an audience. When I was older, I was discovered on a show called “Music Star,” and that led to a record deal and a couple of albums with Sony Music. And not so long ago, I moved to the states, and I found my passion for music production and can now bring all these experiences into my songs.

Well, my first answer here is God. I wouldn’t be where I am if it wasn’t for him and the dreams and faith he puts into my heart. As for my career, there is a multitude of people I could name. But musically, I would say my dear friend and working partner Jason Panniell, who discovered me on my first trip to New York and helped me find the Swiss-American-version of myself as an artist. Synematik, the producer of “New Heights,” and my co-producers the PageBrothers, from NY, definitely helped me find the sound that I have today.

Well, I guess “Music Star,” the television show I was discovered on, and my signing to Sony Music was the start of my official entrance into the music business. Being on that show and working with the label taught me so much about the industry and shaped my feelings on how I work my own project today.

I took violin lessons for about 8 years, piano and guitar lessons after, and had singing lessons in the opera children choir for sure. Starting music early is the best schooling because you train your ears from an early age. I don’t have a degree in music, as I had a major label record deal by that time and was focusing on playing live shows.

My two older brothers inspired me to copy them, so when they picked their instruments, I started playing violin at three years old as well. When they joined the Zürcher Sängerknaben Boys’ choir, I obviously couldn’t follow them as a girl, but my parents would enroll me in the prestigious Zürich Opera House children’s choir at 6 years old. Being on stage every week helped me discover my passion for music and for singing.

Now tell us about your new single “New Heights?”

I wrote the song with Synematik, Taylor Hill, and Lucius Page from the PageBrothers. We thought about what it took for us to get to the point we were, at the time. We all faced major obstacles and challenges in life and overcame them when it would’ve been so easy to just give up, but we kept pushing and remained focused on making progress. And that’s what the lyrics are about. “New Heights” was inspired by the struggles that I or anyone else who has a dream goes through. Those struggles either make you or break you, and “New Heights” is about what is possible when you don’t give up. I think it’s a unique new sound with fresh, futuristic notes of pop blended with underlying hip-hop influences. I hope everyone enjoys it as much as I do!

YES! Who doesn’t actually? I always get nervous when I do something new, and I feel like there’s a lot at stake. Let’s say if you have a huge interview, or when I had to play my first guitar solo live or when I’m on a date, and I really want to impress the guy. 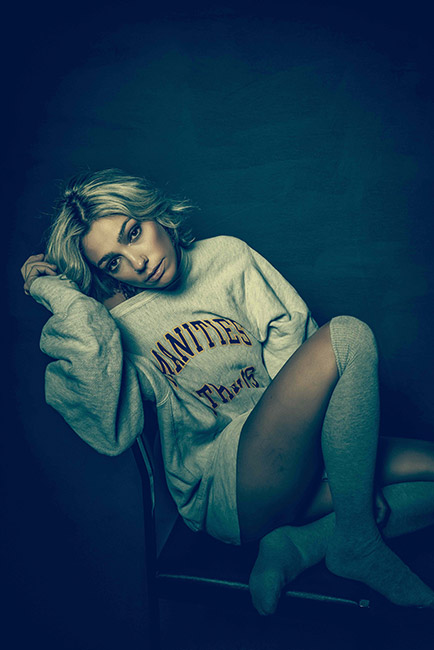 I definitely want to revisit all the instruments I learned like piano, guitar, drums, and violin more often, and I want to add bass guitar to it. Right now, we are in the promoting phase of all this music that we created and releasing. But I also want to go back to the studio phase soon and get better at producing songs and mixing.

I definitely was intending to perform my new music in Europe as well as in the states. With the current situation, this all seems to be a bit further in the future. But I’ve had an online performance for a Swiss TV show last week, for example. This inspires me to find new ways to perform and engage with the audience.

New music with great energy and fun cool visuals, waiting to be heard and seen. I keep my social media updated regularly so everyone won’t miss out on any new happenings. All you have to do is follow me on IG, FB, or TikTok, and your favorite streaming service, if you want to see what is coming! I can tease you with the music video that’s gonna be released soon!

Encouragement! I “push people forward” 100 %. I love to see people succeed, overcome fear, and go further than they ever thought.

Being at peace at all times because you know God is in control. This helps me to keep a good attitude, even when I’m in the middle of a storm. But trust me, I’m not there yet in all situations.

Dancing, but that includes music, I guess…? I had a back surgery a few years ago, and they told me that if I want to live pain-free, I would have to do sports regularly. The fitness center didn’t do it for me as I need to constantly entertain my brain or learn something new to not get bored. When I found dancing, I found it to be both physical and a brain workout, and it became a new passion. Still learning though.

If you like lyric videos, I’m happy to surprise you with one soon! 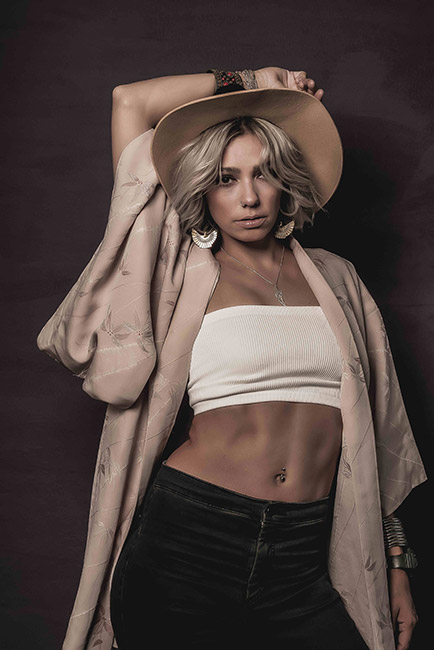 Packed, tight schedules, exciting but always fun. I’m always working on different projects at the same time, and I forget sometimes that I’m not Wonder Woman. But, I do fit a lot into 24 hours. My biggest wish, though, is that the days become miraculously 48 hours someday!

No hangover, sleeping in because I’ve had the best studio session last night, be inspired by a good sermon and worship, pancakes, meet up with friends for a boat trip, and go to a cool live performance in the evening right after getting warmed up at my favorite bar.

Vegetables from my mom’s garden. Lol! I love her cooking as well.

As a Swiss person, I’m supposed to say chocolate, I guess 🙂 But I think I’m in love with American burgers!

Different political views. Lol. I like to have a good conversation with different opinions, but I wouldn’t want to be in a relationship with that person.

My grandfather or Great-Grandparents. Just wanna see where my roots are from, and I want to hear how life was back then. It would be interesting to relate to it and see how my life could’ve been without computers, the internet, refrigerators, or anything from the modern time. Bro! How did they even have fun?? 🙂 And just imagine doing a TikTok video with my granddad, lol!

Still going strong 🙂 There is no doubt about that. If I look at my mom, there is no end to being active, ever. But I think I’ll be touring, creating in the studio and inspiring others for sure, hopefully at a much bigger stage than today.

Fresh, fun, inspired by the skater and snowboard scene, mixed with the latest fashion. I like to combine a nice skirt with sneakers and my penny board just because it’s fun.

It’s a great tool to show your work or art no matter what it is. It has opened the doors for so many musicians, writers, photographers, and other businesses. If you use it in a healthy way, I think it’s the best addition to real life.

Favorite Quote: “If God is for me who shall be against me.”

Favorite Song: “Sky Full of Stars” by Coldplay, but there are so many.