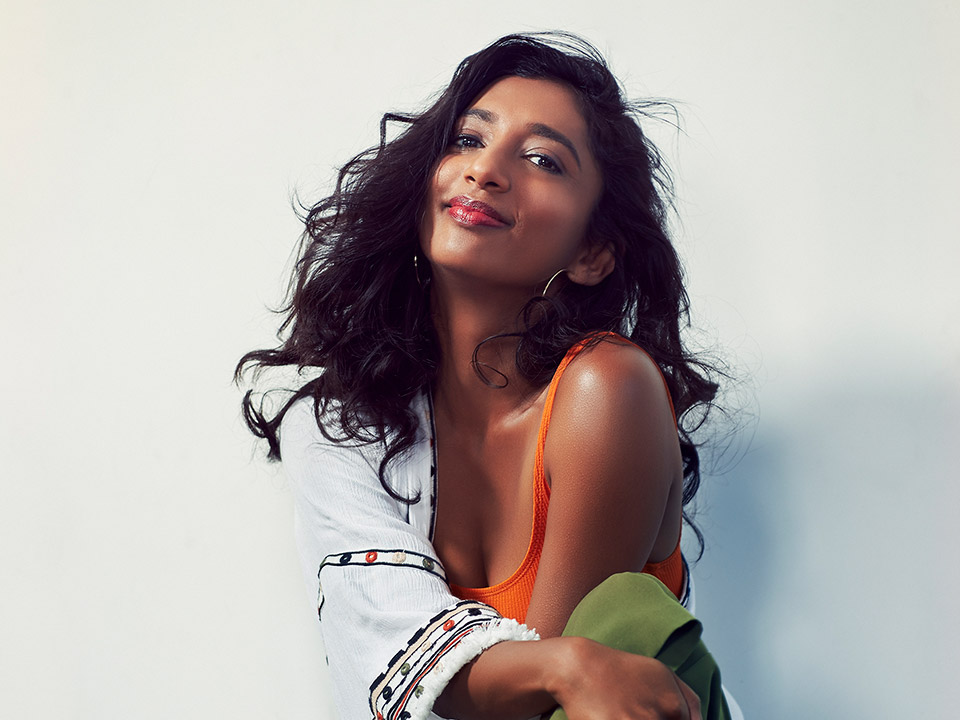 Check our interview with talented Aussie actress Menik Gooneratne who stars in Peter Jackson’s upcoming new franchise, MORTAL ENGINES. Menik plays supporting lead (Sathya) opposite Hera Hilmar (Hester Shaw).  The Universal/MRC produced film is directed by Christian Rivers and executive produced and written by Peter Jackson and the rest of the team behind THE LORD OF THE RINGS.

Menik also was on Australia’s popular TV show, Neighbours, which also launched the careers of Margot Robbie, Natalie Imbruglia, Liam Hemsworth and many other Aussie stars.

I’ve always loved performing. At school, my friends and I would make up short skits and sometimes we’d be allowed to perform them for the younger year levels. My first memory of performing was being cast as the “wild boar” in kindergarten for the Easter Play while I was living in Papua New Guinea. I think landing such a coveted role at age four really got me thinking about a career in acting.

British filmmaker Gurinder Chadha. When I first watched BEND IT LIKE BECKHAM, I was overjoyed to see someone like me on the big screen finally.

Having the freedom to spend my days doing what I love and my night surrounded by the people I love. Also binging on gooey cheese, wine, and Netflix.

Usually, I’m woken up by a foot in the face. The foot belongs to my son who has, yet again, climbed into our bed in the middle of the night. Once I drop him at school, I head to a Muay Thai class. Then I head home and start my working day. Either it’s meetings, writing or character work for a job or potential job. Then it’s school pick up and homework time. Then it is feeding time at the zoo. Once my son is in bed, my husband and I have some time to ourselves. If work is not too busy for either of us, then we’ll catch up on whatever show we’re watching. Quite boring, really!

My dad. He approaches any challenge in life with kindness and empathy. He is incredibly generous and selfless, and I strive every day to be more like him!

Please tell us about “MORTAL ENGINES?”

Produced by Peter Jackson and the team behind THE LORD OF THE RINGS & THE HOBBIT, MORTAL ENGINES takes place hundreds of years after civilization was destroyed by a cataclysmic event. A mysterious young woman, Hester Shaw (Hera Hilmar), emerges as the only one who can stop London — now a giant, predator city on wheels — from devouring everything in its path. Feral, and fiercely driven by the memory of her mother, Hester joins forces with Tom Natsworthy (Robert Sheehan), an outcast from London, along with Anna Fang (Jihae), a dangerous outlaw with a bounty on her head. It’s epic in every sense of the word.

And your role as Sathya?

Sathya is part of the Anti-Traction League, the badass good guys. She is Anna Fang’s protégé, like the Robin to her Batman. She is fierce, passionate and spiritual. You wouldn’t want to bump into her in a dark alley.

How was working with a big name in the industry like Peter Jackson?

Quite fun actually. I was terrified to meet him just because of how iconic he is, but he’s just an incredibly down to earth, enigmatic guy. He and Christian had a very specific vision of what they wanted, which meant we worked really hard, but it was oh so rewarding when we achieved it.

What is next for Menik Gooneratne?

It’s been a pretty hectic crazy year (in a good way), so I’m looking forward to some downtime with my family before hitting 2019 with all I got. I am in the process of adapting a book into a screenplay. It’s called THE WEDDING SEASON. It’s a hilarious snapshot of life as a Sri Lankan Australian, kind of like a cross between BEND IT LIKE BECKHAM and TRAINWRECK. I’ve been chipping away at it for the last few years, but now with the recent success of CRAZY RICH ASIANS a lot of doors have opened up. So watch this space!

I love Rose Byrne and Ryan Reynolds. They are both so versatile and hilarious in different ways.

What is your advice to new young actresses?

Be patient and trust in your talent. Understand that a successful career is a marathon, not a sprint.

Name one beauty product you can’t live without?

I’m more of a vintage girl, but I do love Reformation.

On a yacht in the Caribbean after successfully pulling off a jewel heist.

I’m an everything in moderation kind of girl, so I don’t believe in dieting & cheat days. But my favorite indulgence is Whittakers Coconut Rough chocolate.

Idling around the Amalfi Coast with my husband.

My hero is Noor Inayat Khan. She was a British spy sent into occupied France in WWII. She failed most of her training, but she could speak fluent French, so they sent her anyway. She surpassed everyone’s expectations and became an integral part of the war effort before she was captured. Her patriotism and heroism were astounding — a true badass.

Any show by Mike Schur.

Waking up late and having a yummy Aussie style brunch somewhere (and hi.e. lots of avocado). Spending some time outdoors – either at the beach, park or somewhere scenic. Catching up with friends. Then eating a dinner that I didn’t cook!

Yes, I am an ambassador for Welcome to Australia, which provides support for refugees and new migrants in Australia.

I think it can be a hugely beneficial tool if you have something to promote, but it can also be a black hole of insecurity and comparisons. People forget that social media is not a true snapshot of someone’s life but a carefully curated collection of imagery. We all need to remember to take what we see on social media with a grain of salt.